skip to main | skip to sidebar

As always after the immersethrough sessions are done I have a head that’s pretty empty (tiredness) yet also full (of remembered conversations and images from 16 intense days). I loved the participants and both sessions: the six intense food days in Chiang Mai and near Fang; and the food-focussed travel in Burma (Rangoon, Bagan, and settled explorations in the Inle Lake area.)

New energy returned with full moon day yesterday. Full moon days here are always a reminder of time and belief and also of just how intensely felt and deeply important the lunar cycle is to humankind.

The days around full moon are the time when we can see at night without electricity. That light-at-night marvel surely was an enormous gift to our ancestors. We lose track of it in our overlit electricity-rich lives. But if you find yourself sleeping out where there is no electricity, as a friend of mine did the other night at a Karen refugee camp on the border, you can retrieve the sense of wonder and be in touch with an earlier era of human history.

Speaking of nature's wonders and human history, I have just read a review of New Yorker staff writer Elizabeth Kolbert’s latest book, The Sixth Extinction. Here’s a link to the review: http://www.nytimes.com/2014/02/16/books/review/the-sixth-extinction-by-elizabeth-kolbert.html?nl=books&emc=edit_bk_20140214&_r=0  From it I gather that she takes us through recent natural history and set out clear explanations of human impact on the planet and the choices that we have before us.

It’s difficult to get hold of these issues I find. We wring our hands about catastrophic natural events, but do not change our daily patterns. Instead we take airplanes, buy cars, in general consume resources and generate waste products (from carbon gasses to garbage). Why isn’t there more concerted action to change? Why don’t I change? Why don’t you? I think it’s because the problem seems so big that we feel powerless as individuals. We don’t trust that others will join us and we feel any effort any individual makes is useless. Are we waiting for some environmental messiah to lead us? We already have plenty of them…

How far along this road will we go before there’s leadership that gets all of us into a more long-term thinking mode? Right now it seems as if corporations and governments and we individuals too, are taking care of only short-term interests and short-term results. But environmental risks require long-term thinking. And so here we are.

But back to the full moon. As she looked down on Chiang Mai she’d have seen a few special sights:

It was Makha Bucha day, a special day in the buddhist calendar. It marks the time, nine months after Buddha’s enlightenment, when he gave teachings to an assembly of followers. At the Pa-O temple across the road from my apartment there was chanting in the morning, longer and more intense than usual, and then in the evening more chanting. I went over to have a look and there was the traditional Makha Bucha day procession, led by monks. The chedi and other buildings were lit with low candles in a row outside. The non-monks, about forty or so people, each carried incense, flowers, and a lit candle. They followed the handful of monks and walked around and around (three times) the chedi, chanting in Pali. The monks gestured to me to come join them and called out an invitation. But somehow I felt better as an outsider than as a participant so I smiled and wai’d my thanks, then stayed an onlooker.

I wonder why I didn’t want to join them.

Later on, in the dark, after getting a bite to eat at a cavernous traditional-style Thai eatery on Chang Moi Road, I saw fire lanterns drifting upward from somewhere nearby. It turned out, and this was the other sight for the full moon’s amusement, that someone had had the idea of making fire lanterns out of red paper and shaped like giant hearts (two bumps on top) for Valentines Day. The Valentines Day concert at Thapae Gate, all love songs, amplified and sentimental, was the sound track to masses of young people sending up heart-shaped fire lanterns.

I’ll try to insert a photo here (taken with my telephone). 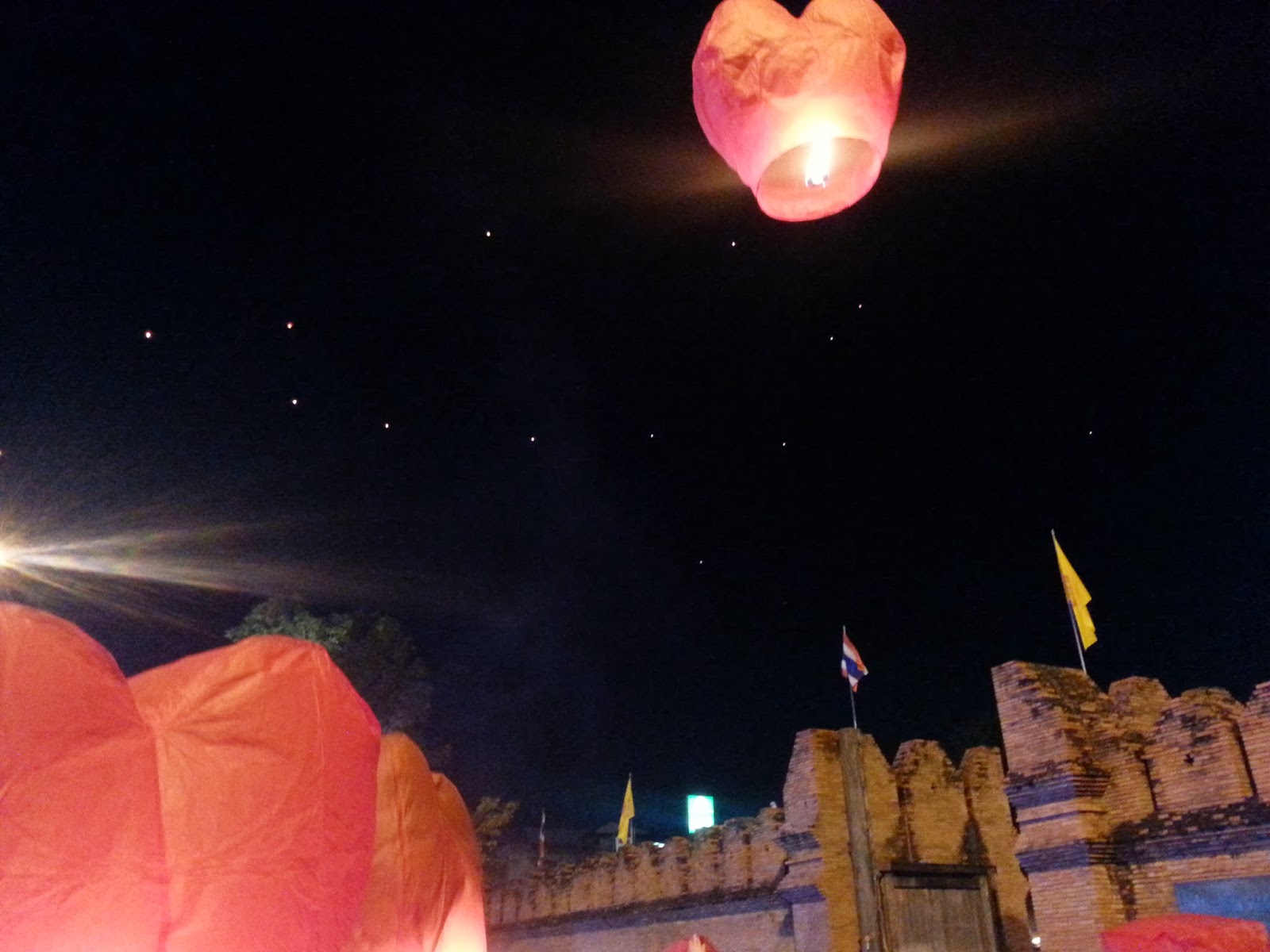 It always seems fraught to me, this combo of paper lanterns and live fire, but somehow it mostly happens without accidents. You unfold the paper, light the gas in the small metal container that is suspended at the bottom of the hollow paper lantern, hold the paper upright, the flame at the bottom, until hot air inflates and fills the lantern, then release it. Up, up it floats, swaying a little perhaps, until it gets caught by a breeze and drifts farther up and away, joining its cousins to make moving shifting constellations in the night sky. “Sanook” (fun) rules here in Thailand.

A similarly unanxious attitude about safety, this time related to food, means that there is great street food and small shophouse resto food here at all hours. The tight-assed approach of North American cities like Toronto, where practically the only streetfood permitted, for safety reasons says the health department, is hotdogs (what’s safe about cow anuses? asked a friend), yields awfulness. Here people keep clean shops and street businesses, and are creative and inventive in what they offer. Many of them have been in business for decades and take good care to maintain their reputation.

But the very word “streetfood” seem to strike fear into the hearts of some people. It’s part of the whole mistrust of the “other” I think. We fear what we don’t know. That’s perhaps reasonable and part of survival of the species. But then we have options: we can stay that way, fearful and tight, which is sterile, or we can try to learn about and experience the unknown and become comfortable with other people’s ways of doing things and of seeing the world.

MY NEW BOOK, NOW IN STORES, NOT JUST IN THE US AND CANADA, BUT ALSO IN THAILAND, NEW ZEALAND AND AUSTRALIA, AND IN ENGLAND, AS WELL AS, UNBELIEVABLY AND WONDERFULLY, IN BURMA ITSELF, AT MONUMENT BOOKS IN RANGOON

SOME PLACES WHERE YOU CAN ORDER THE BURMA BOOK (US)